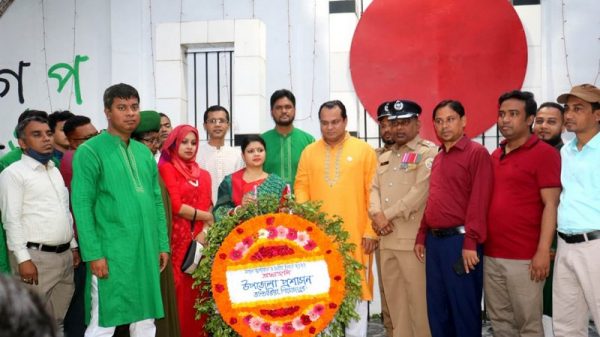 Md. Mahibbullah Hawladar, District Representative, Pirojpur.
In Bhandaria of Pirojpur, on Saturday (March 26) the great Independence and National Day was celebrated with various arrangements at the initiative of the Upazila administration.

The day started with the sound of 31 tapodhwani at the premises of the local Shaheed Minar at the local Reserve Pukur Upazila at 6:15 am. Leaders of various political parties and its affiliates, educational institutions, social and cultural organizations including Upazila and Administration, Parishad, Police Administration, Awami League, Jatiya Party-JP, BNP laid wreaths at the Shaheed Minar in the morning in coordination with government programs and consensus of all locals. .

National flag hoisting in all buildings including government and private. Students of various educational institutions including the National Bihari Lal Mitra Pilot Madhyamik Vidyalaya field hoisted the national flag to the tune of the national anthem, unveiling the dove symbolizing peace, police, Ansar and VDP, fire service and civil defense, scouts, girl guides and clubs. – At the initiative of the students, parades and physical exercises were displayed, displays related to the liberation war were held.

In the afternoon at the same ground, honoring, reception and special banquets were organized for the families of heroic freedom fighters and martyred freedom fighters. In the afternoon, women’s sports competition, Upazila Parishad and Bir Muktijoddha XI, Teacher vs Sudheejan and Business vs Youth XI separate friendly football matches were held.

Meanwhile, on the occasion of the golden jubilee of the great independence, in a development fair at the premises of the Upazila Parishad, all the departments of the Upazila administration and some displays of the developmental activities of the Upazila Parishad were displayed. Besides, prizes were distributed among the winners of children’s drawing and adult composition competitions at the end of a pleasant cultural program at the Upazila Auditorium. Special prayers are offered in various places of worship for the prosperity and progress of the nation at convenient times. Improved food is served in the hospital orphanage.