Belal Hossain, the main accused in the murder case of Kashem member of Mirsarai Sahebkhali UP, has been arrested - Daily Bangladesh Diary

Belal Hossain, the main accused in the murder case of Kashem member of Mirsarai Sahebkhali UP, has been arrested 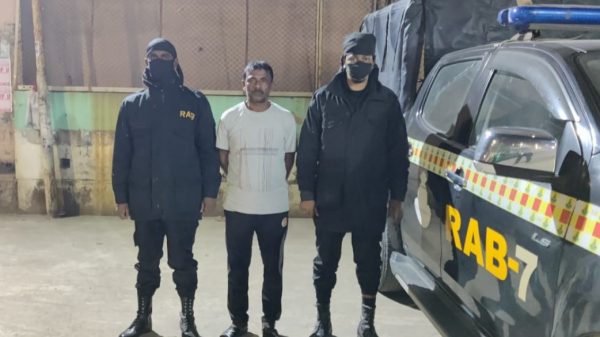 Kamol Chakraborty: Divisional Chief in Ctg:
RAB-6, Chittagong has arrested Belal Hossain, 50, the main accused in the murder case of Abul Kashem alias Kashem, a former member of 6th ward of Sahebkhali UP under Mirsarai police station in Chittagong district.

He was arrested in a raid at Dhania Bazar area under Jatrabari police station in Dhaka at 5.40 pm on February 17. The arrested accused Md. Belayet Hossain is the son of late Md. Tajul Islam of South Magadia area under Mirsarai police station of Chittagong district.

According to the details of the incident, on January 26, Abul Kashem alias Kashem, a 7-time former member of Sahebkhali Union of Mirsarai Police Station in Chittagong District, was stabbed to death with a sharp weapon. , Hitting the hands and head and placing the whole body with mud in the mud on the muddy ground. Later, his family members and bystanders rescued the victim and took him to Chittagong Medical College Hospital. According to the on-duty doctor, the victim sustained injuries to his lungs, liver and kidneys due to the sharp weapon. Abul Kashem died at Chittagong Medical College (CMC) Hospital on the morning of February 1. The victim’s wife filed a case with the Mirsarai Police Station in Chittagong.

Md. Nurul Abshar, senior assistant director of RAB-7, said that since the case, extensive intelligence surveillance, modern and information technology has been used to arrest those involved in the incident. At one stage of surveillance, RAB-7 arrested the fugitive and main accused Md. Belayet Hossain from Dhania Bazar area under Jatrabari police station of Dhaka metropolis on the basis of secret information.

He further said that the arrested accused frankly admitted that he was directly involved in the murder of former member Abul Kashem alias Kashem. The accused Md. Belayet Hossain was the No. 1 main accused in the statement. Since the incident was organized, the accused Md. Belayet Hossain has been hiding in different parts of the country in disguise. The arrested accused has been handed over to the concerned police station of Chittagong district for taking further legal action.