Five pirates, including Kamal, the chief of the pirate Kamal force,were arrested and a large quantity of weapons was recovered - Daily Bangladesh Diary

Five pirates, including Kamal, the chief of the pirate Kamal force,were arrested and a large quantity of weapons was recovered 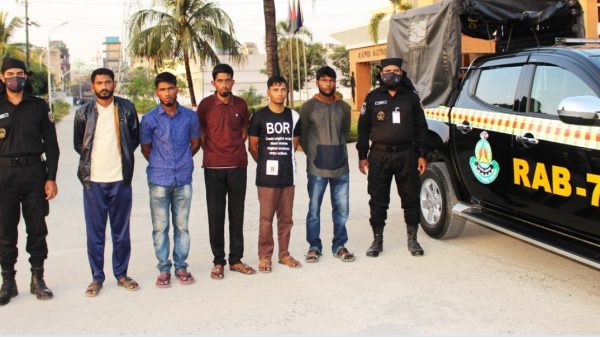 Own reporter:
A total of 5 pirates, including the infamous pirate Kamal Bahini chief Kamal, were arrested along with a large quantity of firearms for kidnapping fishermen and demanding ransom during a 72-hour suffocation operation on Chittagong-Hatia channel. Meanwhile, RAB-8, Chittagong rescued 4 abducted victims and 1 Tutler.

RAB-7 Commander Lt. Col. MA Yusuf said, that on February 11, it was learned through Bangladesh Coast Guard East Zone that members of notorious pirates forcibly abducted fishermen along with wooden trawlers used for fishing in the Bay of Bengal on Chittagong-Hatia channel and beat the fishermen. They are calling their relatives and the boat owner and demanding a large ransom. The news is very important and the safety of fishermen and the safety of sailors including the cargo of domestic and foreign ships in Chittagong border area is related to the image of Chittagong port. The matter was taken very seriously by RAB-7, Chittagong and the RAB Forces Headquarters Intelligence Department was coordinated to provide modern information technology assistance in this regard. Later, a massive operation was launched with the overall cooperation of RAB-6 Coast Guard East Zone and RAB Forces Intelligence Division. As a result of a continuous operation for about 3 days, a clever expedition team of RAB-7 conducted an operation on the 2nd floor of a building under Akmal Ali Road under EPZ Police Station in Chittagong and arrested 5 pirates. According to the information provided by them, 1 shotgun, 2 one shooter guns, 3 ramdas, 3 chapatis, 1 sharp knife and 1 razor were recovered from the roof of the 2nd floor of the building.

He said that among these notorious pirates, Md. Kamal was basically the leader of this group. This is why he used to plan all the misdeeds of their forces and collect money from the relatives of the victims through development and cash. There are two more cases against him including arms and robbery. Captured pirate Md. Noor Nabi used to exchange information and provide food to the bandits and their boats for money. There are 3 more cases including arms and robbery against him in different police stations. Captured pirate Md. Shamim used to keep the victims in the boat and guard them with various tortures. There are multiple cases against him in different police stations including arms and robbery. The captured pirate Md. Annie used to torture the abducted victims inhumanely and at that time he used to weaken their relatives by listening to their phone calls and resort to the strategy of collecting ransom.

MA Yusuf said that during the preliminary interrogation of the arrested accused, it was learned that they had hijacked a wooden trawler with illegal firearms and home-made weapons along with 4 victims for fishing in Chittagong Hatia Channel in the Bay of Bengal. According to the information given by the accused, the boat along with 4 victims was rescued from the kevin of the boat which was forcibly hijacked near the seaside embankment near Akmal Ali Road under EPZ police station in Chittagong.

The RAB official also said that the process of handing over the arrested accused to the concerned police station is underway.

It may be mentioned that on January 21, 2022, RAB-7, Chittagong conducted raids in different places of Chittagong and Cox’s Bazar districts and arrested a total of 15 pirates including the Chief of Kabir Bahini with a large quantity of weapons.