Embezzlement of crores of rupees in the guise of fake army officer;one fraudster arrested 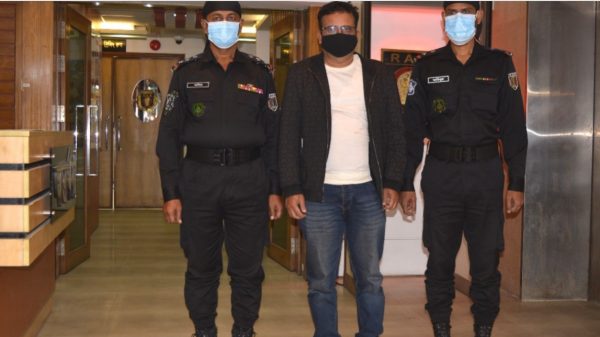 Kamol Chakraborty: Divisional Chief in Ctg.
RAB-1 has arrested Salauddin Bhuiyan, 55, from Mohakhali area of ​​the capital for embezzling crores of rupees in the guise of a fake army officer.

AMM Salauddin Bhoiya (55) of Chandpur district was arrested in a raid on Tuesday night.

RAB-1 Assistant Director Legal and Media Wing Khandaker Al Moin said, that they have been embezzling huge amount of money from various garment accessories companies of the country for a long time without paying their work orders. One such fraudster, Salauddin Bhuiyan, disguised himself as CEO / Marketing Manager / Merchandiser, etc. of various companies and distributed purchase letters from various garment companies for the purchase of goods through fraud. Garment accessories companies deliver the entire product according to the purchase order. Salauddin Bhuiyan later sold the goods to different companies without paying them after receiving the goods. When the victims demand a refund from him, he does not pay the money but instead treats them badly and introduces himself as a retired army officer / IGP’s relative / MP’s relative etc. On February 5, a number of aggrieved organizations lodged a written complaint with RAB-1 seeking legal assistance. As a result, the RAB began a shadow investigation and increased intelligence surveillance.

He said, that in continuation of this, last night an expedition team of RAB-1 conducted an operation in Mohakhali area of ​​the capital on the basis of secret information and arrested the fraudster Salauddin Bhuiyan. During the operation 1 photo frame bound for the uniform of Bangladesh Army, 1 vest, cap, wallet and medal used by the army, 4 fake letter pads, 1 fake letter pad, 1 fake seal, 2 fake purchase orders, 2 fake swatch pads, 2 check books, 3 mobiles. Phones and various contents and Rs 9,830 in cash were seized.

He further said, that during the preliminary interrogation, the arrested Salauddin confessed to various frauds. The arrested Salauddin Bhuiyan has been committing various frauds for the last five years. According to the allegations of the victims, he has embezzled more than crores of rupees. At present he has been conducting such activities for the last 3 months by renting a sublet in an office in Mohakhali.

Khandaker al-Moin said, the arrested Saladin further stated that he had not been at any address for more than six months. Besides, he edits various pictures through Photoshop and uses them for cheating. Earlier, there were three cases of fraud and embezzlement of money in his name in different courts. In addition, cases of several aggrieved organizations are under process. Legal action is being taken against the arrested accused.