Md. Mujahidul Islam of Kotwali Zone has been elected as the Best Assistant Commissioner of CMP. - Daily Bangladesh Diary

Md. Mujahidul Islam of Kotwali Zone has been elected as the Best Assistant Commissioner of CMP. 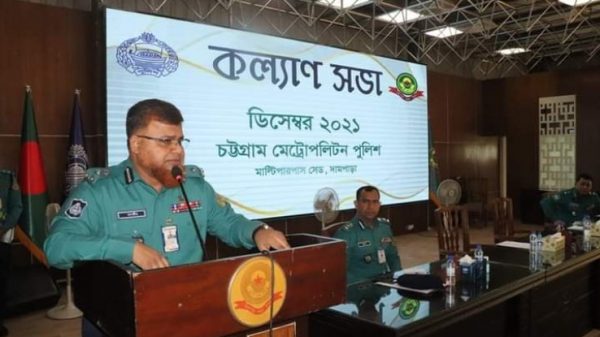 Monthly Welfare Meeting of Chittagong Metropolitan Police was held on December / 2021. During this time, some police officers have been awarded as the best department and the best drug rescue department.

The monthly welfare meeting of Chittagong Metropolitan Police for December / 2021 was held at Multipurpose Shed at Dampara Police Lines at 10.30 am on Wednesday, December 08.

Today’s meeting started with the recitation of Holy Quran and Gita. The meeting highlighted the memory of Md. Monirul Islam, a police constable who was killed in the line of duty on December 4 and observed a minute’s silence in remembrance of his great sacrifice. Deputy Commissioner of Police (Headquarters) Mohammad Amir Zafar informed about the steps taken to solve the problems raised by the police members at the welfare meeting held last November.

Speakers at the meeting commemorated the contribution of Father of the Nation Bangabandhu Sheikh Mujibur Rahman in the great war of independence. He also spoke about the activities of the Rajarbagh Police Lines, which formed the first resistance in the Great Liberation War, and the role of the police personnel working in the CMP at that time. Also in his speech, the CMP Commissioner directed the police personnel to perform their duties with honesty, integrity and duty. During this time he listened to the problems of the police members at different levels and gave instructions for immediate solution.

At the meeting, cash prizes and honorary certificates were given to 29 police personnel of different levels in different categories for performing their duties properly in November 2021, recovering warrants, arms and drugs, unraveling the mystery of the case, arresting the accused and doing good deeds. In addition, cash assistance was provided to 36 police personnel from the CMP’s service fund as medical assistance at the request of the police members at the meeting.